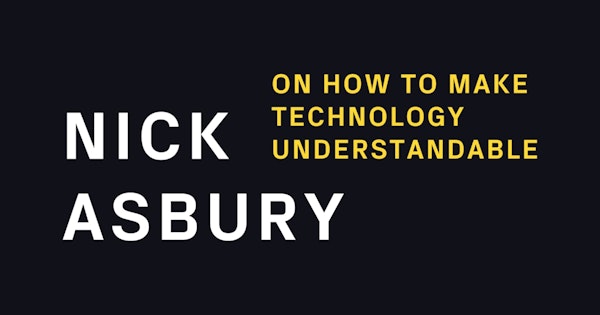 Nick Asbury (@nickasbury), the writing half of British design agency Asbury & Asbury, discusses Sideways Dictionary, how to make jargon understandable again, and the value of a good analogy.

We’ll start with a meta-question: can you explain the Sideways Dictionary with an analogy or two?

Well, it’s like a dictionary to explain technology, but using analogies instead of definitions. Or it’s like a crab because it moves sideways. Or it’s like a game of conceptual snap – you look for unexpected matches between digital concepts and something in the analogue world. One of the working titles for the project was Analogue Analogies.

How did you get involved in the project?

I was lucky that Alfred Malmros, who works at Jigsaw, got in touch out of the blue to start a conversation about it. He had this idea of using analogies to help explain technology to the world. The example he gave was email being like a postcard, but an encrypted message being like a sealed letter. That’s a simple analogy that he’d found himself using in conversation, and many IT people use their own personal analogies in a similar way.

The idea was to create a place to share those analogies and create new ones. The tech world in general is full of people trying to explain digital concepts to the world – especially to politicians and journalists – and analogies can be a useful way to do it. They don’t explain the whole concept, but they give you a way in. And they’re naturally visual and memorable – if you listen to an hour-long presentation, the thing you remember is often the colourful analogy in the middle.

How was it made? Can you tell us about the incubation process at Jigsaw?

For the first few months, it was just me and Alfred involved. We had a few conversations about the concept and what form it should take. I went off and thought about project names, ways to describe the project, and some example analogies, and things gradually developed from there. Alfred asked Hello Monday to develop it into an online tool where people could rate and share the analogies, as well as contributing their own. And Google Creative Labs created some simple films explaining the concept and how to write an analogy.

I was seeing analogies everywhere. It’s like staring at a blue swatch for five minutes and then looking round the room and all the blue things suddenly leap out at you.

Clouds, cookies, sandboxes, spam – a lot of technological terms already have analogical origins. Why do you think they need revisiting now?

Working on the project opens your eyes to role of analogy in language generally. You can get quite geeky about it – analogies are built into the way the brain works.

You’re right that a lot of terms have analogical names already, but those analogies have strengths and weaknesses. For example, the Cloud is a poetic analogy for information that wafts around wherever you go, but it’s also deceptive – the reality is that information doesn’t float around; it’s stored on very physical servers that belong to someone else. You can cast the same technology in a different analogy (like a power grid or bank account) and see it in a different way.

To use another topical example, the net neutrality debate depends on whether you view the internet as a utility like electricity or gas, or more like a (super)highway where there’s a precedent for introducing fast lanes and toll booths. The analogies you choose shape the way you see the issue.

Some of the entries are wonderfully detailed. One moment you think you’re learning about DDoS attacks, then all of a sudden you’re reading about the Berners Street hoax of 1810. Why do you think storytelling is an effective approach to understanding?

The research process was fascinating and occasionally agonising. With each term, the first thing I would do would be to look up any analogies that were already in general use and see if they could be improved upon – often the seed of the idea is there but it needs condensing or reframing in some way. But in most cases, it involved staring out the window, thinking intently about DDoS attacks and scanning my mind for analogies. I’d consciously cross-reference each term to fields like sport, history, household objects, films, books and the natural world.

In the case of the Berners Street hoax, I think it must have come from persistent and creative Googling, trying to dig out an example of a DDoS attack in real life. It was a genuine historical incident where a practical joker ordered a load of tradespeople to turn up at a random address and ended up shutting down half of London. Stories like that stick in the mind, because they’re full of specific imagery and associations – our minds find it easier to hold onto stuff like that, whereas abstract explanations can make sense at the time but somehow fail to stick.

Why did you decide on multiple analogies for each entry?

We were very aware that analogies are imperfect by definition. As Alfred said at one point, ‘The more perfect the analogy, the less useful it is’. At best, they shed light on one aspect of the issue, like a torch shining on a statue in a dark museum. But if you get six torches and approach from different angles, you get a better all-round view.

I think of analogies as being tools towards explanation, rather than explanations in themselves. That’s the way the dictionary has been taken up and used. We’ve seen a lot of tech people using the analogies in presentations, lectures and workshops – not to explain the whole issue, but to create a hook and get people interested.

I think of analogies as being tools towards explanation, rather than explanations in themselves. That’s the way the dictionary has been taken up and used.

Computing concepts can be rather abstract, not easily simplified. Were there any entries you struggled with interpreting?

I remember Bitcoin being hard work. There was a complicated analogy already in circulation, involving a locker room made of glass – but it was pretty dense and needed simplifying to be useful. I was quite pleased with my Tinkerbell analogy, to explain that Bitcoin only works if enough people believe it works. But that’s only explaining one aspect of Bitcoin – it’s not getting into the mechanics of how it works. With all analogies, there’s a question of how much you ‘zoom in’ or ‘zoom out’ on any given issue – you can think of an analogy for the general concept (Bitcoin is like digital gold), or you can think of an analogy for the process (glass locker room).

Sideways Dictionary is out there now, open to public contributions. Are you involved in vetting these at all?

I’m not, but it’s in good hands. One of the great things about the project is that it’s been done in partnership with the Washington Post, who have embedded it into their website so you can see analogies for a technical term whenever it appears. A dedicated person at the Washington Post is diligently managing the submissions and keeping the quality level high.

Do you have any particular favourite submissions?

Yes, some have been really good. One compared a Botnet to mean girls in school – ‘Once Regina makes her opinion clear, the rest of the clique mirrors her’. Another compared an API to a dual language restaurant menu. So even if the waiter and customer speak different languages, they have ‘enough points of commonality to achieve both their aims. Tourist gets fed, waiter gets his/her tip’.

Nick’s other projects include the Perpetual Disappointments Diary.

The dictionary is now used by the Washington Post and is available as a Chrome plugin. Are their plans to distribute it further?

I’m not sure – part of the modus operandi at Jigsaw is that they act as an initiator and incubator for new projects, then find a partner (in this case the Washington Post) who will take it on, while they carry on exploring new things. So the site itself is the real outcome – a tool that will keep growing and be available to everyone.

Is there potential for adapting the Sideways approach for other alienating, jargon-filled sectors? I imagine something like this would be useful for making sense of politics or the torturous house-buying process.

Yes, I’ve definitely wondered if it could extend to other areas like politics, law and accountancy – maybe even branding and design. I’d be tempted to do a whole dictionary along those lines, but Jigsaw’s mission relates to technology in particular and this would be a different thing. It would also be a scary amount of work.

It must be hard to let go. Do you find yourself waking up in the middle of the night, suddenly struck by a spot-on analogy for buffer overflow attacks?

It’s been over a year since I was in the intense stage of the project, so I’ve had time to recover. But for a while I was seeing analogies everywhere. It’s like staring at a blue swatch for five minutes and then looking round the room and all the blue things suddenly leap out at you. Thinking of analogies is similar, except instead of staring at the colour blue, you’re staring at a definition of Bitcoin. But in a way, it’s only a heightened form of the way you think anyway as a creative – always looking for sideways leaps and unexpected connections.