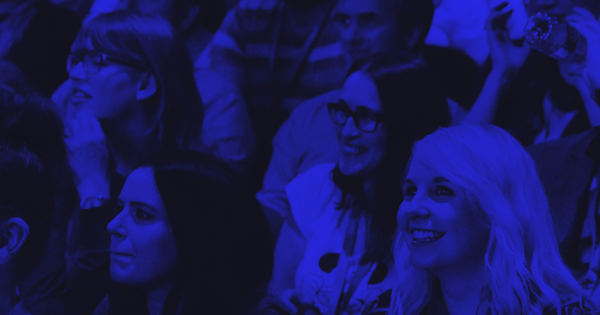 How Designer and Developer Zach Inglis Started a Design Conference

Designer and developer Zach Inglis, talks us through how he and his business partner Laura set up a design and tech conference with a little twist.

Hey Zach, tell us a bit about yourself and HybridConf.

I’m a web designer, developer and programmer. I’ve been in the industry for around 16 years now. School wasn’t working for me, so I started teaching myself design and development as something to do instead. I haven’t looked back since. I currently run a small studio Superhero Studios with my business partner Laura where we work on a wide range of web and branding projects.

HybridConf is a conference that Laura and I started in 2013. The first event was in Cardiff, and we’ve done three more since, all four in a different European city.

What inspired you set up Hybrid?

The original premise was to bring people together from different skillsets within the web industry. As someone who designs, develops front-end, and programs back-end, apps, and games; I’ve learnt where there can be friction between disciplines. It often boils down to the fact that people haven’t been exposed to what each other’s job entails, so there are a lot of misunderstandings. The idea of Hybrid was to help people better understand their colleague’s roles, learn how they can work more collaboratively, and explore what other parts of the industry they might be interested in too.

However, it quickly morphed into having a much broader theme of inspiration and support. We learned that there are so many topics that are relevant to everyone, from hearing exciting stories from other industries that can inspire our work, to personal tales about overcoming setbacks or motivating yourself to learn new things.

Hybrid also came about from frustration at the state of other UK conferences at the time. I felt that there was a lack of events that were welcoming for everyone and that featured new or different speakers. I had a lot of help when I was joining the industry that helped me to be where I am now, so I decided to pay it forward by creating the type of event that I would want to attend and that I hoped would encourage and enable others, an event where everyone felt valued, where attendees weren’t treated as a lesser class to speakers, and where fresh and diverse voices got a chance on the stage.

What made you decide to do Hybrid in different cities?

Changing cities was never the plan from the beginning, it was just something that made sense as we went along. I’ve moved around a lot in my adult life and was feeling the itch after being in Cardiff for a couple of years, so I accepted a job leading design at a startup in Sweden. We discussed keeping Hybrid in Cardiff anyway as it was established there, but in the end we decided to move it to Stockholm for year two so that it could be accessible to a different group of attendees.

After that, it just made sense to keep it up. Those who could travel got to visit a new city, and those from the new location could enjoy a different design conference at home.

It’s not something I’d recommend to everyone. Changing cities creates a lot of extra work, from having to advertise to a new audience every time, to working out accounts and VAT for each country, but it was worth it to get to bring Hybrid to four awesome cities.

How was trying to deal with the nitty gritty of conference organising at first? Eg paying people, visas, finding accommodation/venues.

I jumped right in to the deep end for the first conference. For some reason it made perfect sense at the time to organise a full-blown two day conference without any experience even putting together a meetup first (in hindsight I wouldn’t recommend my approach!)

If it wasn’t for having a business partner to help, I don’t think I could have done it. We had to learn as we went and had no idea at the offset all of the different things that were involved. There are some parts that are obvious like booking speakers, selling tickets, and getting a venue, but there are so many other things to consider, from getting events insurance to ordering volunteer t-shirts. And on top of all this work that has to get done in such a short time, things will always inevitably go wrong, so there’s a lot of fire-fighting involved too. We still have some of our todo lists from previous years and they’re pretty monstrous - it constantly seems like you’re adding more new items than you ever cross off.

Despite the stress though, I don’t regret a moment of it. The experience of the conference more than makes up for the months of hard (and often dull) work that it takes to pull it all together.

What’s the best part about setting up your own conference?

That’s easy. It’s the days of the conference itself where you get to watch people happy and enjoying themselves because of the work that you did. There’s no other experience like it.

The other best part is when guests buy tickets. Every ticket is like it’s own little moment of joy - even after four years Laura and I would still shout ‘Ticket!’ every time a notification came through about a sale. The fact that people believe enough in your project that they put their hard-earned money into attending is super humbling and exciting, whether they’re the first or two hundredth person to buy.

What was your best ever moment from Hybrid?

There are so many! I have to list a few of my favourites.

Is there any tips you would’ve given yourself in the early days of setting up Hybrid?

Spreadsheets are paramount. The first year we more or less put it together as we went, but in subsequent years we set up our monster spreadsheet from the get-go. They were generally 25-30 tabs detailing everything we needed to know, from hotel rate offers, to the arrival times of the speakers’ flights. There’s so much to do and to know, and keeping it all in one place reduces confusion massively.

Get more help, and have people ready to work with you. We found it really hard at first to get any help from anyone, as we didn’t want to give up control, but over time we’ve found that the benefits of trusting people to help out far outweigh any negatives. A conference is much bigger than one (or two) people, and it’s imperative to have those extra hands to make it run smoothly, and to take even the slightest bit of stress off your shoulders.

Be prepared that there will be no profit. It seems at first that you could make a lot of money from a conference, but it’s not going to happen (certainly not if you want to create the type of event where you respect your speakers and attendees and want to give them a great value experience). This is ok, but make sure to save up beforehand.

What’s next for Hybrid?

Hybrid is the thing I am most proud of so far in my life, but after four years we’ve decided that there won’t be a fifth. Or at least if there is, it won’t be for a long while.

Running a conference is amazing and rewarding in ways that I’d never have imagined, but it’s also a huge amount of work, and financially draining. So I’m looking forward to being a bit selfish and working on me for a bit.