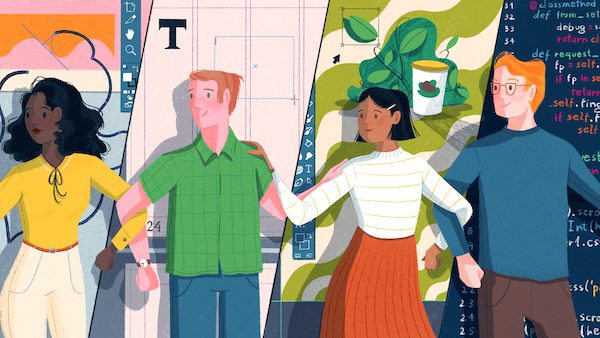 Why Collaboration Trumps Competition When You're a Freelancer

Let's talk about reframing how you see your competition and how to actually build with them to collaborate on more projects.

One of the first things you might notice when you’re freelancing is seeing the sheer amount of competition there is out there. I didn’t even think about how many designers and advertising freelancers there were before I jumped into this career choice, and I definitely felt a huge sense of overwhelm once I realized I wasn’t the only one who specialized in what I did.

I remember going on sites like Upwork, Fiverr, and Toptal and seeing how many website designers there were and how much they were charging and immediately rethinking how I priced my services. Fortunately, I didn’t entertain that thought for long nor did I really spend much time on those platforms because of the distaste I have for treating freelancers like gig workers.

After a few months into freelancing and realizing that reaching out to cold traffic leads was a lot harder than I thought, I decided to take another approach.

Get Rid Of The “Me vs. Them” Mentality

On Squarespace’s website, they had a directory of all of the Squarespace experts who have been designing on the platform for a while. I figured why not just reach out to these people and see if they need any extra help on projects or at the very least, if they had any extra leads they could send my way?

I could have thought that these designers are my competition and that I shouldn’t be trying to join forces, but I knew that they were a lot more established than I was at the time and that if I wanted to get introduced to new networks, then I needed to meet other designers.

The result of this process? I was able to connect with a lot of great designers and landed a pretty steady contract gig with a designer that I still work with to this day. It turned out that he was looking for other designers to help with the influx of leads that he was getting and it just happened to be great timing with me reaching out.

It took me about 10-15 minutes to draft an email and this turned into steady income that I was able to use to grow my freelance business.

What’s important to remember here is that there is enough to go around. You might think that you're facing a ton of competition with your services, but in reality there is enough work to keep everyone happy.

When we focus less on how we can beat our competition and more on how we can offer the best service for the client, more often than not, you will see that there will be no shortage of projects coming your way.

A great way to partner up with other freelancers or agencies in your field is to set up a referral pay structure between you and them.

The standard rate is anywhere between 5-10%, but I found that if I am able to offer it on the higher end, then other designers are more likely to refer me to projects because they get a good end of the deal too.

If you're working on a retainer project, you can set up your fee on an ongoing basis per month if that's easier as well. The structure is really up to you on what you and the other party think is fair, but I would highly recommend getting something set up in place.

You will also soon realize that your network of other freelancers will become your support group as well. Like anything else, freelancing ebbs and flows and there will be great months and some that are not so great, but it all comes with the territory.

One way to help on those not-so-great weeks/months is to have a group of other freelancers who you can vent to, ask for help, ask for referrals, etc. Your network can even be your “direct competition” of people in the same field as you.

For example, I am in a Slack channel with a group of other Squarespace designers who all offer the same or close to the same services that I do, but we use this channel as a way to vent to each other, share resources, and even just catch up. While we could be competing against each other, we’re all friends at the end of the day and if one of us is struggling, we’re all there for support.

Beyond just building your network, it's also important to set a schedule to regularly check-in and update each other. When I started freelancing, I was adding everyone that I could find on LinkedIn, but I really didn’t have a gameplan to expand beyond the initial reach out and connection. I quickly realized that if I wanted to utilize my network to my best ability, that I needed to regularly check-in with them and be there as well for support if they needed.

Anyone can keep adding people to their network, but when you take the time to build upon that relationship slowly, you will see the fruits of your labor keep showing across your own business.

Freelancing is a tough and often times lonely career path, but it really doesn’t always have to be that way. While you might face serious amount of competition, you can also shift your mindset to see more people to collaborate with and to build your network.

The work is out there and while we all face slow months from time to time, our network of other freelancers can really help us break through more barriers than if we tried to do everything alone all of the time. So the next time you see another freelancer who specializes in the work that you do, instead of writing them off as your competition, why not reach out to them, introduce yourself, and see how you can support each other?

Max Pete is a freelance Squarespace designer and advertising specialist. He has been freelancing for over 5 years and works with small businesses, consultants, and e-commerce brands. Currently, Max is starting a new venture into business coaching for freelancers/solopreneurs and is offering free 30-minute consultations.

Also in this series

How to Stand Out With Your Story

The Mindset Shifts You Need to Make When Becoming a Freelancer

Also in this series

It's time to talk about the fun behind the scenes work every business has to do.

How to Stand Out With Your Story

We all have something that's unique about each of us and it’s important to be able to share that with our potential clients.

The Mindset Shifts You Need to Make When Becoming a Freelancer

Max Pete on what it really takes to freelance full-time, and stick it out for the long term.