🚨 33% off all courses for Black Friday + THREE brand new courses: Intro to Python, Python for the Web + Shaders for the Web!

In the midst of the 2020 presidential election, brands across fashion, tech, and music are partnering with nonpartisan organizations to encourage people to vote.

Is there a nonpartisan aesthetic?

Collaborations have resulted into a plethora of sweatshirts, mugs, stickers, face masks, and social media posts. In doing so, these graphic explorations articulate neutrality in various ways.

Many of the partnerships are not explicitly political; however, all images have historical precedents, which make an unbiased image practically a myth.

These collaborations come at a time of social and racial reckoning in the United States, where the political climate is highly charged and highly partisan. Many feel that it’s essential to avoid neutrality and that the issues at hand are not debatable. However, initiatives need to communicate to a broad audience in order to increase voter participation, hence the goal of “nonpartisanship.”

Here is a survey on what nonpartisan voter graphics look like in 2020. 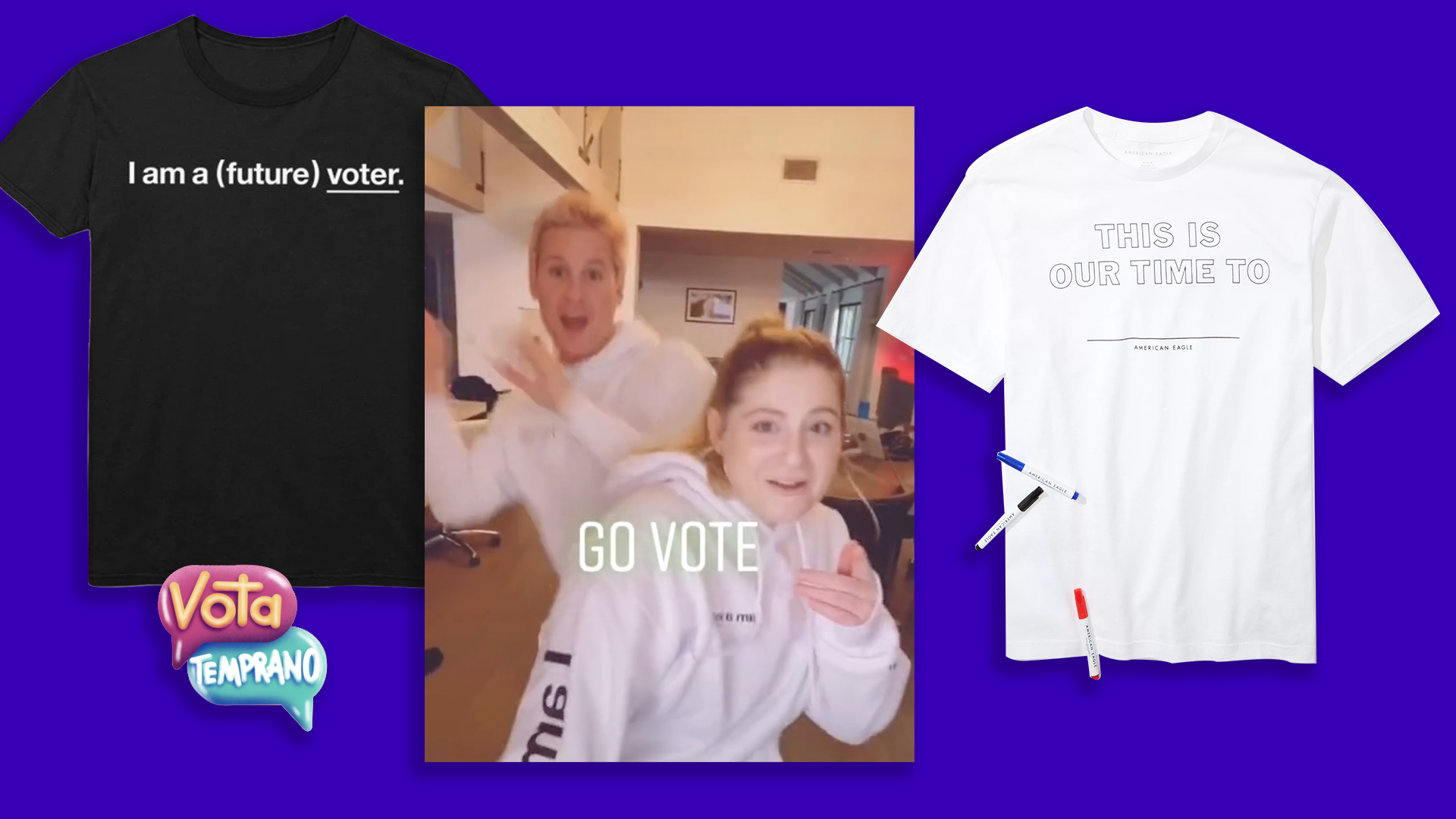 Neutrality has a long and debated history concerning graphic design.

Beatrice Warde’s influential 1932 essay, The Crystal Goblet, presented a long-winded metaphor that describes the modernist belief that the designer should be invisible. Her piece is about typography, but its thinking is shared in modernist principles across all design studies.

This philosophy informed the practices of the Russian constructivists, the Bauhaus, and later, the Swiss International Style, which utilized left-aligned sans-serif typography, rigid grid structures, and photography rather than illustrations.

Initially, these movements relied on structure and systems to provide visual uniformity as retaliation against World War II. Ultimately, they became wildly commercialized and a frequent barometer of “good design” because of how they advanced the profession. However, many designers criticize these ideas because worshiping this philosophy overlooks other ways of making that reflect social movements and diversity rather than commercial success.

Regardless, the origins of the Swiss International Style are rooted in neutrality principles and have been so widely used that many might consider this visual language as default. Unsurprisingly, nonpartisan voter design incorporates this type of visual language.

Consider the organization, I am a Voter. This organization embraces the Swiss International Style’s ideology to craft a systematized visual language using Helvetica and black and white.

The organization’s name itself could not be more precise. It extends this directness throughout the messaging, which features large, legible typography that reads “I am a voter.” across t-shirts and baseball caps. The text gets adjusted on toddler products, which read, “I am a (future) voter.”

Free from ornamentation, this visual language is unobstructed and direct. The lack of color removes any sense of patriotism and instead lets the message speak for itself.

The musician Meghan Trainor and her brother, Ryan Trainor, wore white, “I am a voter” sweatshirts in a recent video shared on TikTok, Instagram, and Twitter. The clip is set to Trainor’s new jingle, “Register and GO VOTE” and features the siblings dancing together, first in a home, and then in front of a ballot drop box with an American flag on it.

It appears that Trainor used Instagram’s native story editing tools to craft the video. The typography on the video reads, “Go Vote.” The caption includes a countdown until election day. It encourages users to share a check emoji ✅ if they’re signed up and ready to vote. On Twitter, the caption includes a link to Trainor’s customized voter registration page on the website of Michelle Obama’s nonpartisan organization, When We All Vote.

Trainor created a custom song and used her celebrity to motivate her audience to vote. Using default editing tools and adding on to a system that already exists feels connected to the International Style’s “as little design as possible” ethos.

Instagram itself uses its platform to provide voter resources and information. Upon signing into the application, a thin banner reads, “See voting resources and official updates about the 2020 US Election.” The message is typeset in your operating system’s default font with a small icon with a star beside the message. Once you click on this banner, the Voting Information Center appears. It provides information based on your state and shares facts provided by the Bipartisan Policy Center. The entire page is consistent with Instagram’s interface and brand colors, including vivid gradients transitioning from blue to pink.

On the Voting Information Center, Instagram also highlights a custom set of voter stickers that you can use to spruce up your stories. Each sticker is visually distinct from one another and has several variations that you can select. The icons include both an active and past tense of the same message and are available in English and Spanish. For example, a sticker with a 3D message bubble that reads “Vote Early” is available as: “Vote early” “I voted early” “Vota temprano” and “Yo voté temprano.” Instagram’s method speaks to a broader audience simply because it is bilingual and presents itself in a form users are already familiar with.

American Eagle and the nonprofit organization HeadCount use a default visual language to encourage customization, too. Their This is Our Time t-shirt reads, “This is our time to _________” and comes with a set of three fabric markers that wearers can use to write on the front of the t-shirt. While the tee’s messaging references a default input form, the blank space encourages personality and variation, allowing wearers to highlight their individuality within a system. While the shirt’s design feels removed from patriotism, photos of the shirt show it styled with red and blue illustrations and patriotic motifs. 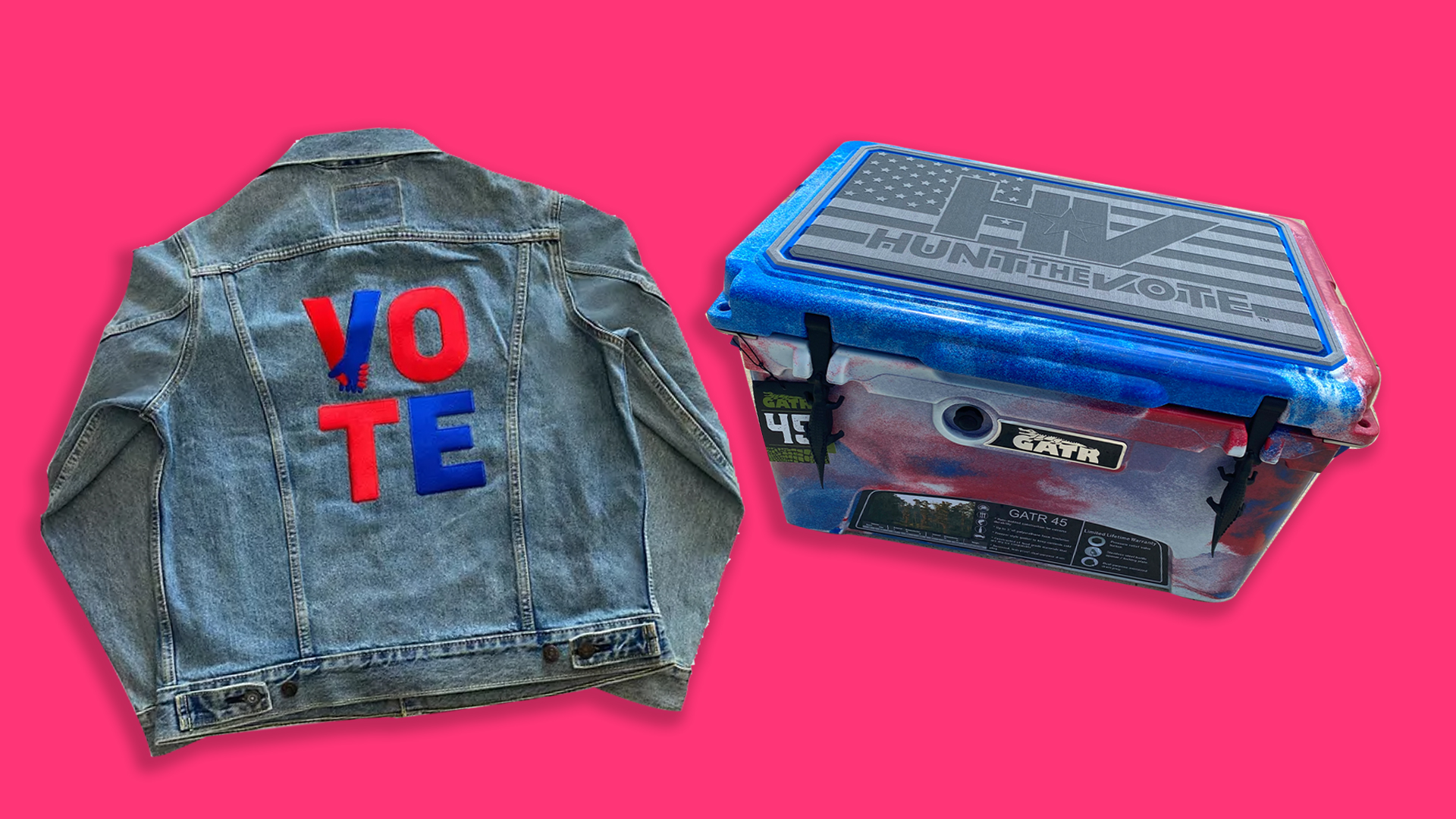 Americana is the visual language that contextualizes the United States’ spirit, especially regarding the rugged pursuit of the American dream and a sense of nostalgia about the romanticized imagery of old Westerns.

The American flag inspires many visual motifs, from the colors red, white, and blue, to the stars and stripes that appear on it. These motifs get abstracted and communicated into national graphics for both the Democratic and Republican parties, each claiming a color. Used together, they display patriotism and unity.

The iconic denim brand, Levis, partnered with Rock the Vote to create an embellished jean jacket. The jacket is a vintage silhouette. It features a large, red, and blue typographic “VOTE” message on the back. Levi’s also created a set of other tees and products, maintaining this patriotic color palette. This partnership presents Americana as stylish, albeit campy. This sensibility feels timeless as it continues to appear in pop culture from Bruce Springsteen in the 80s to Lil Nas X’s 2019 hit, “Old Town Road.

On a seemingly less fashionable note, the nonpartisan organization Hunt the Vote’s mission is to increase voter awareness among the hunting community. Their website utilizes red, white, and blue as the primary brand colors. The organization lists its values as “God, family, country, hunting, and our outdoor lifestyle.” Recently, they collaborated with Hannah Barron, a popular hunter from Alabama, with 778,000 Instagram followers. Barron and Hunt the Vote are running weekly sweepstakes urging people to pledge to vote on their website. Once participants commit to voting and enter the sweepstakes, they are running for a customized Gatr 45 Cooler. The cooler is spray painted red, white, and blue. It features the “Hunt the Vote” logo superimposed on an American flag on the cooler’s top.

Hunt the Vote’s cooler and Rock the Vote and Levi’s denim jacket reference different aspects of American heritage. Interestingly, the organization’s names differ only by their verb: to hunt vs. to rock.

Rock and roll and hunting are slices of the same piece of apple pie but speak to wildly different audiences, despite the organization’s shared goals of increasing voter turnout at large. 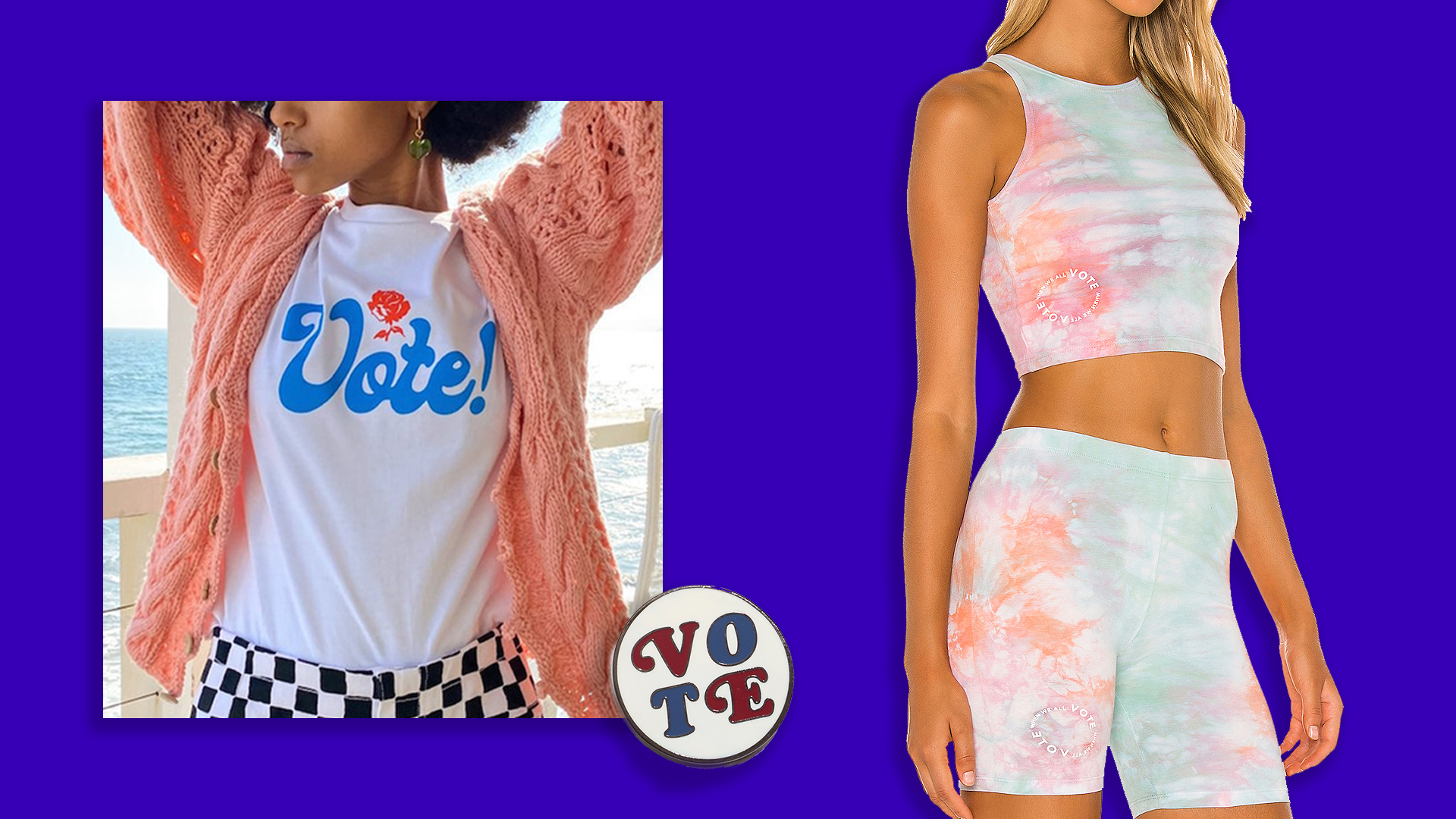 During the late 1960s and 70s, visceral imagery of the Vietnam War confronted Americans. Thousands of people were outraged by the war’s violence and participated in protests across the country. Anti-war events took place across university campuses and quickly evolved into a peace-loving and anti-war hippie counterculture that unified a generation.

When you imagine hippies, you might visualize Woodstock, tye-dyed garments, kaleidoscopic graphics, experimental rock music about drug usage, ultra long hair, and an affinity with the planet and sustainability. Over the past decade, this aesthetic has remained part of popular culture. Music festivals such as Coachella embrace this vibe. Sustainability and planet care continue to be significant political issues and defining characteristics of new waves of fashion companies.

During this election season, this visual language has expanded into vote inspired initiatives.

Lisa Says Gah, an independent sustainable fashion company based in California, created a unisex tee that says “Vote!” in a hand-drawn, script with a vintage feel. The fashion company is donating 50% of their profits to Higher Heights Leadership Fund. The product includes a link to When We All Vote in the online description.

The brand modeled the garment on Faye Orlove, the founder of Junior High – a nonprofit that helps artists marginalized by systemic inequalities, including patriarchy, capitalism, and homophobia. This spirit of taking action and speaking out about issues feels similar to the movements around Vietnam. The typographic lettering itself feels bulbous and lively, in line with band artwork of the era like Heart, Jimi Hendrix, and Sugarloaf.

This typographic treatment is similar to the one incorporated by Madewell on an enamel pin. The pin highlights the word “VOTE” with a swash accent on the “V” and the “E.” Advertisements and publications of the 70s used similar type treatments.

Aside from hand lettering, tie-dye is another motif from the Woodstock era that is still trending. The online retailer, Revolve, partnered with When We All Vote and sells tie-dye biker shorts and a tank top that include a small, “When We All Vote” typographic embellishment on each.

These counterculture trends are rooted in revolt against the political climate of the time. Today, this idea is loud and clear, especially with younger audiences who are hoping to make a change this November 3rd election. While the initiative to encourage voters to register and show up is nonpartisan, the associations with these styles are unapologetically not.

This year, the highly anticipated presidential election is polarized and divisive. It is a challenge to craft an unbiased image and the goal of communicating to everyone might be lofty. However, the pursuit of increasing voter turnout is a positive one, regardless of political party. If you’re a citizen in the United States remember to make your voice heard this election and exercise your right to vote.